Gardening was on a list of things I’d get around to at some advanced point in my life. “I’ll give gardening a try [or whisky, or baking, or Wagner’s Ring Cycle, or tai-chi] when I’m 60. Or maybe 55, ha ha.” That’s what I’d say, thinking I had all the time in the world — so much time that I could schedule hobby-epochs as though my life were a study timetable.

Life doesn’t go like that. Better to use the time while you’ve got it. Now that I’m mumbly-seven years old, it’s looking as though there aren’t enough dispensable liver-years remaining for me to discover whisky, nor enough wet Sundays for me to penetrate Wagner’s Ring.

But I have become a gardener. Every day, I work in my funny-shaped ornamental garden, and most nights before sleep I imagine what I need to do next and what that little precinct of mulch and shrubs might eventually become. So that’s a physical and a mental commitment.

The desert blooms, a bit. My ornamental garden in December 2017. Notice our then-first sunflower, held to its stake by a snippet from an old business sock.

I did write a little about the early days of my garden. I told you that Tom gathered posts, driftwood and fallen branches from around the farm, then placed them by our tiny house and decreed this random-shaped enclosure to be our garden.

With neighbour Yvonne’s expert advice, I dug flowers and a few shrubs straight into the turf. Between the plants I packed grass clippings and a few dried-up horse droppings. 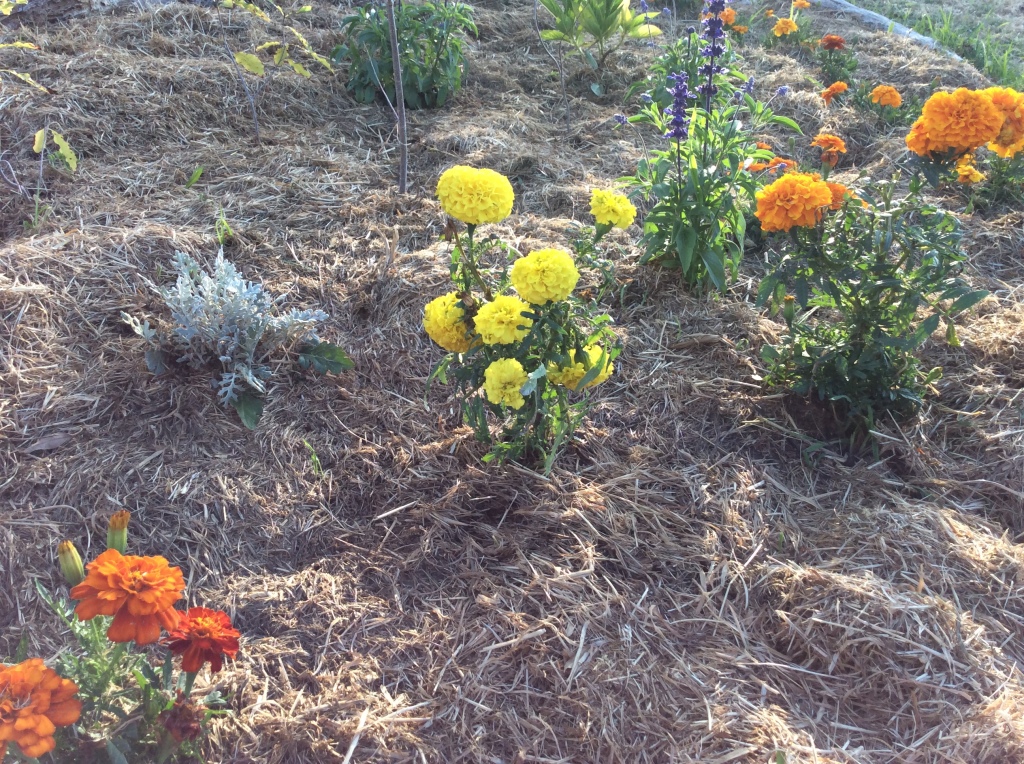 The twice-daily then daily waterings began. I mowed and mowed the surrounding paddock purely to harvest the clippings. The garden got packing after packing of mulch. I added compost, and persecuted every weed that showed its heretical head.

Those layerings of mulch have formed a crisp mat around the plants, subduing the grass beneath and forming a warm, gooey stratum of rot that one day will be soil.

The flowers and almost all the shrubs have bloomed and spread. They’re growing together to form a canopy of red, orange, yellow and violet that I never thought I could create.

Then There’s The Front Yard

I also planted along the fence line of the front yard. Twelve runner bean seedlings have, through pig attack and dog play attrition, become seven — but those are now coiling their way up and along the fence panels. Saucer-size leaves grab the sun’s energy and send it to flowers and a few embryonic beans (just as our solar panels harvest photons to feed our battery).

A bean seedling has scaled the fence and deployed its solar array.

No edible beans yet but I rate it another success, despite the nibblings of peacocks.

I feel that these efforts of gardening are an achievement that tells me we can achieve more. We can shape a bit of land and make it into what we need. Success breeds Success, with under-celebrated Effort coming between.

My next challenge as Gardener is five earth-filled tyres that bolster the slope between our backyard and the Makahuri community garden.

This vegetable garden is a little miracle, a mini-Israel where the desert has been made to bloom. With lots of hard work and planning by Yvonne and others, a patch of brambles and high grass has become a source of food and pride for Makahuri’s small population.

Much of the grubbing, digging and enclosure-building was done by Wwoofers — young people who’ve signed up to the Willing Workers on Organic Farms programme. They come to Makahuri for a few days or weeks helping with projects, thereby picking up all kinds of practical skills.

One Wwoofer, a friendly German named Tobi, installed the six tyres. He filled them with “soil”, which in this beachy area means one part topsoil, nine parts sand, and the memory of water. 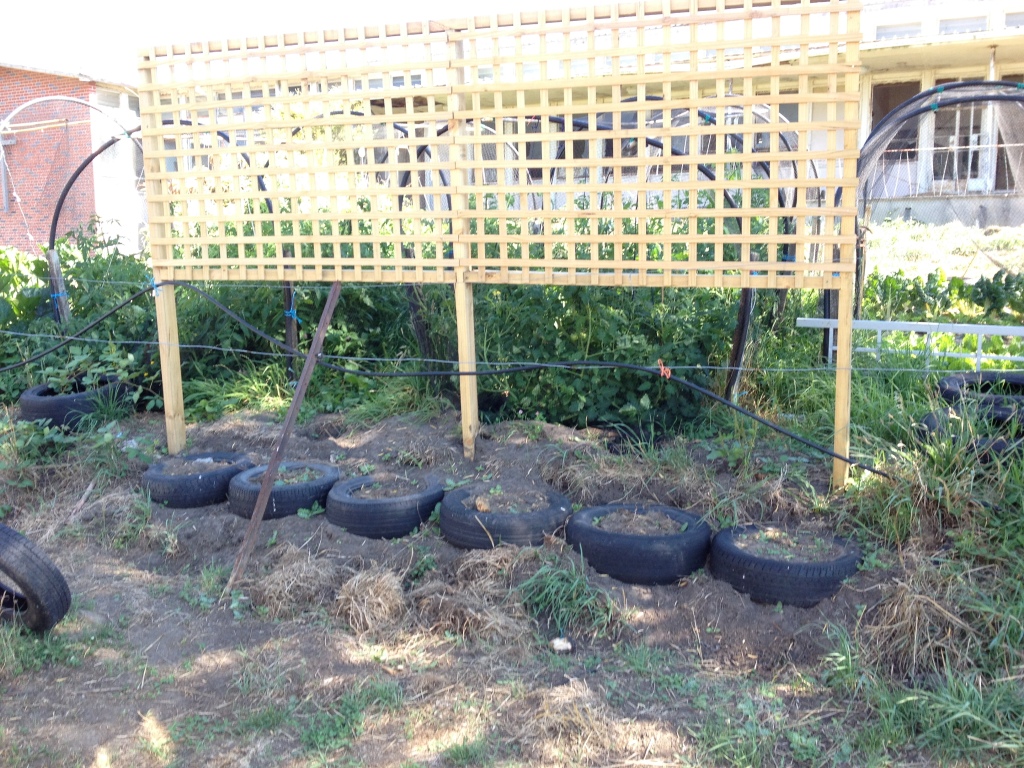 Six tyres full of sandy dirt. But in a few months … who knows?

I plan to trowel in some compost and maybe peat to improve this soil, and grow — what? I don’t know yet. Lemon trees? Roses? Suggestions welcome. Whatever I choose, I feel I should call it the Tobigarten.

There’s more planting space, too, in the triangular garden. I want to plant so it looks good and suits the space and soil that we’ve got.

There’s no hurry with this. There are lots of books, websites and videos to study, and I’ve always liked studying. Everything I learn will be useful to Tom and me for the rest of our tiny-house lives.

6 thoughts on “Cower, Weeds, For I Am Gardener”