On Saturday we signed to rent a site for our tiny house. Finally, after two handshake agreements fell through in the space of a month, we have land.

The land is what we New Zealanders call a “paddock” — a rectangle of flat grassland with an east-to-west row of trees at the north, breaking the prevailing wind…

… and a derelict building just beyond the southern border… 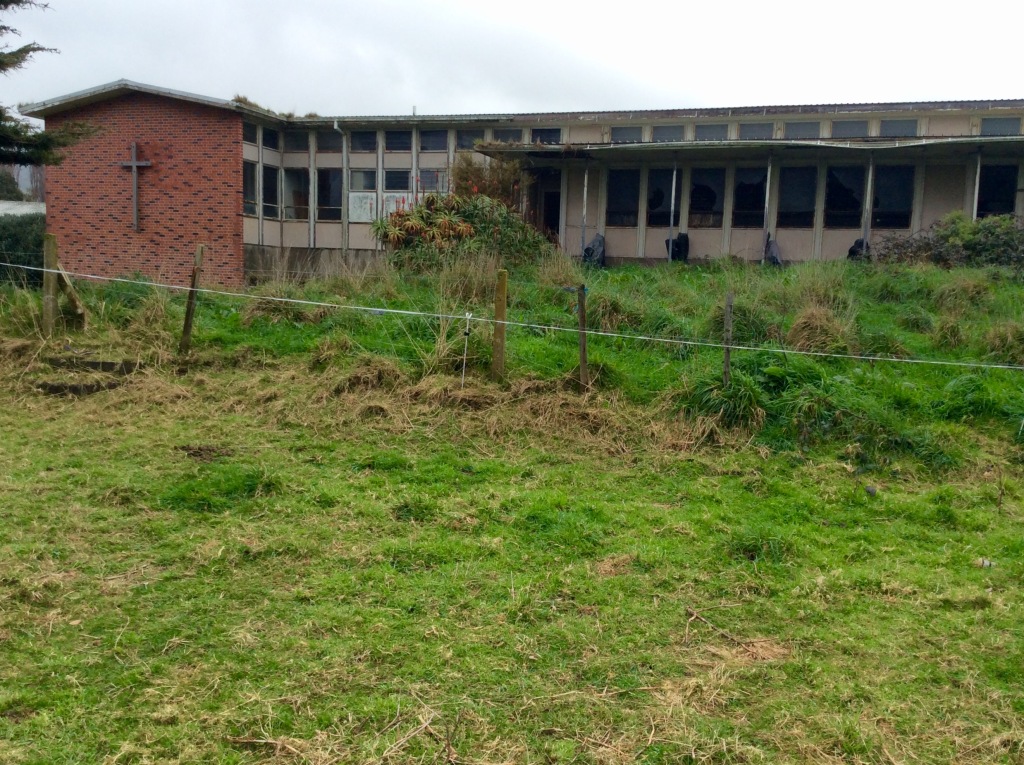 “Derelict,” you say, eyes wide and concerned about our wellbeing. And yes, it’s very run-down and robbed out, with pigeons roosting in its joists. But this building has quite a history; if walls could talk, these ones would shout, cry, curse, and sing hymns in unison.

It’s a former dormitory and classroom block of a school that closed long ago. On the end of that long, single-level block is a plaque set into the red bricks: the building was opened by no less than the Archbishop of Wellington, Peter McKeefrey, later New Zealand’s first Catholic Cardinal.

On the day in 1957 when McKeefrey opened the block, it was the latest built addition to Marycrest, a school for troublesome girls. Here, on a landscaped campus in the middle of a working farm, the girls — nearly always wards of the court — did their studies, rode horses, played tennis, swam, and sewed pyjama seams as free labour in an onsite factory.

The school grew from its beginnings in the 1930s till its closure in 1983 to include the original manor house, a chapel, a convent for the teaching nuns, a rector’s cottage, a gymnasium, tennis courts, a swimming pool, and four blocks of classrooms and dormitories.

Oh, and a paddock with an east-west row of trees at the north.

Here’s how it looked as an operating school.

You can see at the lower right of the complex that row of trees. Behind that is the paddock where next week, we hope, our tiny house will be wheeled into place.

In this recent satellite photo, with north at the top, you can see that straight line of trees and some of the Marycrest buildings.

The paddock is unchanged since the 1980s but the buildings suffered. Various buyers dreamed of turning the school into some kind of paying business, but gave up. A local landowner who heard rumours that the old school was set to become a prison bought the property to prevent that from happening — and then did nothing with it.

The buildings started to fall apart in flakes. Squatters moved in, and then out. Taggers left their mark. Robbers took the copper and what antique joinery they could cart away.

The old school became a near ruin, gutted by thieves and tufted with overgrowth. It was a place where photographers came to take sad, affecting portraits of faded glory, or perhaps a low-budget zombie skit for YouTube.

But late last year, someone bought the place — a marvellous couple who wanted a challenge like no other, in a place like no other. It would be their home, and home to others — including perhaps some tiny-house people.

By now, they’ve got the manor house (see below)…

…as a fully functioning home, with lots of plans for every one of its 13 rooms. The chapel is in amazingly good condition, and the biggest classroom block has sound enough bones that it can be restored or converted.

The other buildings — not so much. Including the block that will soon be the southern view from our tiny house. But even that has potential: we saw a small room in it, dry and clean, which we might put a lock on and use for storage.

The new owners of the site have named it Makahuri, apparently its pre-Catholic name. The highest hillock on the land is, we’re told, a battle site from the 1830s where fortifications once stood. Local Maori want to designate this area as tapu.

When our house is in place, we’ll look out from our kitchen window on that tapu hill.

The paddock is good and flat, wind-sheltered but sun-blessed. Right now, three rescue horses are grazing and shitting on it, the two methods they use to “keep the grass down”. A no-kill animal welfare group looks after the horses, and given their history it was a joy at the weekend to see them strolling peacefully around the paddock.

When I took out a tape measure to mark out the exact spot where our house will go, the horses strode up to sniff and investigate. But otherwise, I foresee them to be trouble-free neighbours.

One more thing that makes this place even more remarkable: it has resident feral peafowl. That local person who bought the land years ago put peacocks and peahens on it, then left them. Their descendants now strut around, perching on old roofs (we saw them on the one in the photo above) and crying like lost souls.

Makahuri is close enough to Tom’s work for him to commute. But it’s very far from the kind of suburbia where we’ve lived. Life is going to be very different.

Coming in the next post: how our house looks now.